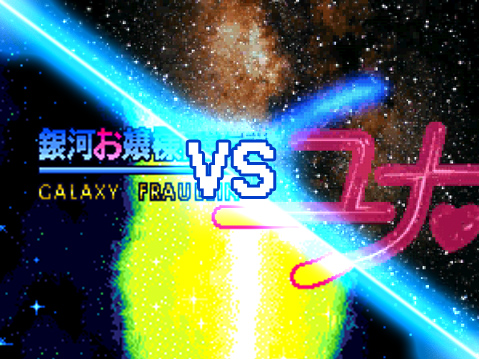 I was thinking of writing a few lines about the new anime season but I’m waiting for episode 2 of the shows I’m following, so that’ll have to wait. Instead, I’m going to do a little shoot-out here with two versions of the same game; 銀河お嬢様伝説ユナ (Ginga Ojou-sama Densetsu Yuna) or Galaxy Fraulein Yuna. I’m going to issue a 56k warning here 😀

I don’t have any proof, but quite I’m confident that a great many gamers and anime-fans haven’t heard of this particular title before. And I don’t blame them. With the third and last game released for the PS1 in 1998 and a series of OVAs released around the same time, Kagurazaka Yuna is indeed an icon of times past. There is a compilation of the first two games + sought after spin-off Ginga Fukei Densetsu Sapphire released for the PSP in Japan, 2008, but I’m not really counting that.

With artist Akitaka Mika at the helm, Galaxy Fraulein Yuna is a classic multimedia franchise, including everything you would expect; games, anime, CDs…the lot.
The plot revolves around the cute but somewhat ditzy 16-year old Kagurazaka Yuna, who just happened to win an intergalactic beauty contest (the Ginga Ojou-sama contest – hence the name) and with that suddenly became an idol, with all that entails. However, not only does she receive fame, but also the title of “Saviour of Light” and must do battle with evil forces – in this case, her rivals from said competition, who have had their hearts “stolen by darkness”.
And that’s the gist of it. Sounds corny to you? It is. But I think the game’s straightforwardness works in it’s favour.

The series started out on the PC Engine, with the first game released in 1992. It saw a re-relase (the one I have) with some additional content in 1995 and also a sequel. In 1996 the first game got a re-make on Saturn titled “Remix”. So, you’d imagine that the Saturn version is quite the upgrade from the, by then, 4 year old original version. After all, the Saturn is known as a 2D powerhouse and the large number of high quality adventure, visual novels & digital comics in it’s library certainly speaks in it’s favour.
But you’d be wrong. And in this comparison we will see why. Before we get to the screencaps, let’s compare the opening:

Now, I used Magic Engine (PCE) and SFF (Saturn) respectively in order to grab some screencaps, from the beginning to the first battle with jealous rival Kaede. I used emulation because I’ve got both systems hooked up to a CRT-screen at the moment and we all know how well that goes with photography. Right.

While the Saturn version features anime-cutscenes in the more modern style the series adapted as it series went on, everything is a mess. Let’s be honest here, the Saturn never had any luck with FMVs (I blame bad codecs) and when they replaced the pixel art cutscenes with the handrawn ones, we’re well on our way to artefact central. Speaking of artefacts, around all character portraits, there’s this almost halo-like pixelation, or what looks like the result of a poor job with the magic wand tool in Photoshop. Not to mention that many character portraits are re-used from the PCE-version, and thus doesn’t match with the newer character design. Other casualties includes the backgrounds, which now looks like they were made in MS Paint – and I’m not joking. The map-screen, which is displayed when you change location in the PCE-version, is absent and so is almost the whole GUI. We’re left with a very bare bones interface with only a semi-transparent blue bar for text and character portraits.

While I appreciate that the game now runs in full screen, it all looks so amateurish. The battle system also gets an “upgrade”. What used to be merely a rock-paper-scissors kind of thing now also has 3 quickly changing stats (attack, shield & evade) which needs to be timed correctly for maximum effect. The idea itself is good but the result is lacklustre. It makes my eyes spin. Also, the grainy FMVs make their comeback during the battle.
In fact, the only thing that can actually be seen as an improvement in the Remix-version is bigger character illustrations and the sound, and even then it’s not a very big difference. Voices sound maybe a little less compressed and the music is no longer chip-generated, but whether that’s a good or bad thing is debatable. This time, it’s a bad thing because no one seemed to care enough about the music to really make it any better. The PCE version actually sounds a bit more distinctive.

If you think I’m hard on Galaxy Fraulein Yuna Remix, it’s because an improved version of a game released on 32-bit system, should not be inferior in almost every single way to the original version, released 4 years prior on what essentially is an 8-bit system. If they just had actually sat down and harnessed the power of the Saturn, it could’ve turned out a great remake.

Now, I do enjoy this particular franchise, and some day I should really pick up the third game for the PS1 or Saturn…and maybe the PC-FX version, should I manage to get my hands on one of those.